Find this article at:
go.ncsu.edu/readext?600647
— Written By Deborah Hunter

Carpenter bees are large, black and yellow bees often seen hovering around the eaves of a house, wooden fences, or the underside of a deck in late spring. They are most often mistaken for bumble bees, but differ in that they have a black shiny tail section.

The carpenter bee is so‑called because of its habit of excavating tunnels in wood with its strong jaws. The round (1/2 diameter) entrance holes are usually found on the underside of a board. A tell‑tale trace of coarse sawdust is often found on the surface beneath the hole. The holes start upward (or inward) about 1/2 inch, then turn horizontally with the grain and may run six to seven inches or more. Occasionally, several bees may use the same entrance hole and have individual branches off the main tunnel. If the same entrance hole is used for several years, tunnels may extend several feet in the wood.

Wooden decks and overhangs are a prime target. Painted surfaces are less preferred, but they are not immune to attack. Unpainted or stained cedar, cypress, and redwood shingles and siding are also attacked despite their pest‑resistant reputations. Carpenter bees, like their distant relatives, the carpenter ants, differ from termites in that they do not consume the wood as food. They are merely excavating tunnels for nesting sites.

Carpenter bees overwinter in abandoned nest tunnels. They emerge in the spring, usually in April or May. They feed on plant nectar, then begin constructing new tunnels in a few weeks. Each female drills a tunnel in which she gradually builds a large pollen ball. She then lays an egg and seals off the section of tunnel containing the pollen ball with a chewed wood partition. Additional cells are similarly provisioned until the tunnel is completely filled, usually with six to seven cells. Males do not drill tunnels, but they are territorial and will harass other bees and people who venture near their protected areas. The males, which can be distinguished from females by a whitish spot on the front of the face, do not sting. Females are capable of stinging, but rarely do so unless confined in your hand or are highly agitated. These adult bees die in a matter of weeks. The eggs hatch in a few days and the offspring complete their development in about 5 to 7 weeks. Adults begin to emerge in later summer. Although the bees remain active, feeding on pollen the general area, they do not construct new tunnels. With the onset of cold weather, the bees seek overwintering shelter.

Carpenter bees do not cause serious structural damage to wood unless large numbers of bees are allowed to drill many tunnels over successive years. The bees often eliminate their wastes before entering the tunnel. Yellowish‑brown staining may be visible on the wood beneath the hole. Woodpeckers may damage infested wood in search of bee larvae in the tunnels. In the case of thin wood, such as siding, this damage can be severe. Holes on exposed surfaces may lead to damage by wood‑decaying fungi or attack by other insects, such as carpenter ants.

Nesting activity may be substantially reduced by treating the entrance holes with an insecticidal spray or dust. Products containing carbaryl (Sevin), malathion or resmethrin are suitable. Avoid inhaling the insecticide or contaminating your clothing with the spray. Always stand upwind from the surface you’re treating. Since abandoned tunnels may serve as overwintering sites, or be re‑used next spring, it is important that they be plugged with wooden dowel or wood putty. The insecticide treatment is intended to kill both the adult bee and its offspring as they emerge later. Plugging untreated tunnels with wire mesh or similar material might trap bees inside, but more resourceful bees will simply chew another exit hole.

The appearance of carpenter bees in both the spring and summer is difficult to predict. Therefore, preventive sprays applied to wood surfaces are rarely effective and unsound, since virtually any exposed wood on the house is subject to attack, and surfaces would require several treatments over time to provide any reasonable barrier. Spraying bees seen hovering around is not a sensible use of pesticides either. Swatting hovering bees is just as effective. 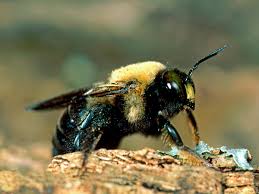