Find this article at:
go.ncsu.edu/readext?627506
— Written By Deborah Hunter

I mention these insects every year and many of you probably know everything I could tell you about them. But I think it’s worth refreshing your memory. These insects are also known as “multicolored Asian Lady Bird Beetles”.

“Harmonia axyridis” is a yellow to orange colored lady beetle that often is seen in large congregations on buildings around the middle of October and inside houses throughout the winter. The multicolored Asian lady beetle is the preferred common name for this lady beetle introduced from Japan for control of tree‑inhabiting aphids. The adult lady beetle is quite variable in appearance. Individuals can be any color from a pale yellow‑orange to a deep orange‑red, and have from none to more than 20 black spots. They are very prolific and may live up to three years.

The USDA made several releases throughout the eastern United States in an attempt to introduce this beetle into North America. Now established in the East, South and Northwest, some sources claim the current H. axyridis is descended from lady beetles that entered New Orleans and Seattle on ships; that those beetles, released as biological controls in the early 1980’s in Louisiana, Mississippi, and other parts of the South, East and Northwest failed to adapt and died. In 1988, scientists found an established population in Louisiana. We first saw them in Western NC in 1993.

The multicolored Asian lady beetle inhabits various trees, including maple, walnut, willow, and oak, and feeds on various aphids, certain scales, and a few other insects. It is an effective predator of aphids on pecans, pine trees, ornamental shrubs, roses, and other plants. In many areas pecan growers no longer need to spray their trees for pecan aphid because this lady beetle has done such a good job of biological control. Beetle populations tend to explode when there is an abundance of aphids, often eliminating the local aphid population.

Even though this lady beetle is an important biological control agent, it can become a nuisance when they aggregate in large numbers on homes or other buildings. For several days during autumn they typically cluster on sunny, southwest sides of light‑colored rock outcroppings or structures where nearby crevices serve as overwintering sites. Homeowners complain when there are thousands of beetles covering their house. They may have to walk across piles of them on the deck. They get in picnic food and drinks, “swarm” like bees and land on people. Beetles can be especially annoying when they get in the house by crawling through openings such as uncaulked window frames. Outdoor aggregations may leave voluntarily after a few days or weeks or may move into cracks or crevices of the house to spend the winter.

The best way to prevent beetles from becoming uninvited houseguests is to seal cracks around windows, doors, siding, utility pipes or other openings with a good quality caulk. Replace or repair damaged screens, and install screens over roof vents. Indoor aggregations can be removed with a vacuum cleaner with a crevice tool. They can also be swept up with a broom and dustpan and deposited outside well away from the house. Washing them off your house with a strong stream of water may also be somewhat effective. We don’t recommend using insecticide. Because of their large numbers, you probably won’t notice any significant reduction, so you won’t be satisfied with the result and will have sprayed for no reason.

Killing them with insecticides, squashing them, or handling them may result in orange stains on walls and fabric. When stressed the lady beetles secrete a harmless, but staining, orange substance. This liquid is actually blood that comes out of the joints of the legs a phenomenon called reflex bleeding (all lady beetles do this when stressed). 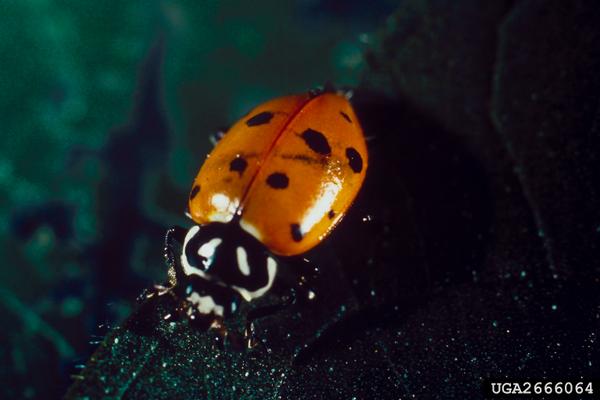