Find this article at:
go.ncsu.edu/readext?747231
— Written By Joe Deal and last updated by Deborah Hunter 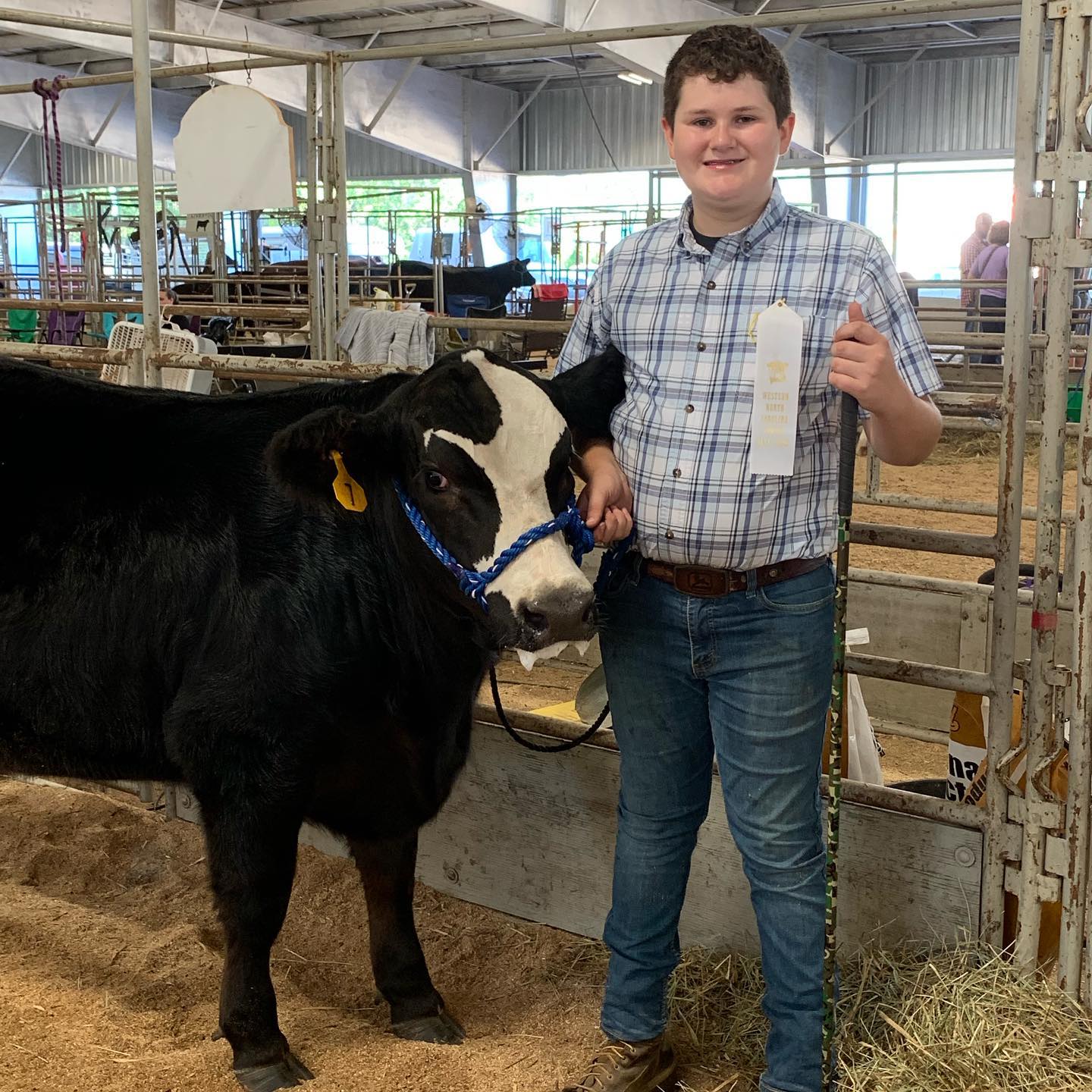 The Covid-19 pandemic turned the world upside down for many people in 2020 and is still impacting the way we work, play and interact in our everyday world. One thing though that has not changed is our responsibility to care for our livestock. When work, school, athletics, band, and all the other hobbies that we took for granted came to a screeching halt this spring those animals still had to be fed, watered, groomed and their stalls cleaned. While many families were left wondering what to do with their new found time on their hands, those kids with livestock still had plenty to keep them busy.

Cayden Hunter joined our 4-H market steer program because he had an interest in raising and showing cattle. He didn’t have any cattle of his own, but cattle were of interest to him. Our market steer program provides youth who don’t have cattle or don’t have a place to keep a calf the opportunity to raise and show a market steer. It is a year-long commitment that the youth and their family sign up for. For a ten year old boy, getting your first calf comes with much excitement and anticipation. Leeroy, as the calf would be named became Cayden’s project that fall.

Over the course of the next year, I would get to observe Cayden working his steer. Usually his mom and dad were right there with him, occasionally some friends would tag along and then some of his cousins became more frequent visitors. Very rarely would his older sister be around, and when she was, she didn’t take too much interest in what was going on. It became more clear that this steer project was more than just a hobby for Cayden. His passion continued to grow, and the connection between him and his mom grew stronger as they had found “their thing”. Cayden and his dad had lawn mowing and football to connect them, but this calf brought his mother and him closer.

As we moved on into 2019, Cayden wanted to make sure that he would be able to have a calf for 2020. Leeroy had come from Ms. Claudette Dillard’s farm in the Cowee community and I try to keep our project calves from Macon County. Nancy Bateman had contacted me earlier that she might have some steer calves for our program. I arranged a visit with Nancy and she had her winter/spring calves penned up and ready when we arrived. Cayden was able to pick out the steer he wanted for his next year’s project calf. After a short discussion of size and birthdates and structural soundness and color and temperament, Cayden chose a calf named Navy to be his next project calf.

The following week, we loaded up Navy and moved him to the fairgrounds where we house our market steer project calves. It didn’t take but just a few days to get him halter broke and ready to show in the 2019 Macon County Fair as a feeder calf. Two of those cousins who had been showing up as Cayden worked with Leeroy were now asking about getting their own steer. So in October of 2019, we purchased two calves from Harvey and Bill Fouts for Clarke and Anderson.

As easy as Navy was to halter break and get ready to show, “Cash” and “Frederick” were a little more work to get ready. I guess if raising cattle can teach us anything, it is that persistence pays off and we got them halter broke. The kids came every day to do their chores. Winter can be the doldrums of a steer project as the days are short and cold and it seems that feeding and watering get monotonous. One thing we have to look forward to is the Spring Fling in April at the WNC Ag Center. So as the cold months grew on, the prospect of those spring shows kept us from getting discouraged.

Well, just about the time we registered for the 2020 spring fling, this thing called Covid-19 reared its ugly head and just like that, our world stopped for a short while. Offices closed, schools closed, events were cancelled and we all didn’t know exactly what to do. Even with all the closures and cancellations, those animals still had to be cared for. Every single day, they required the same care as before we shut down. Even when the extension agent can’t come be hands on with them anymore, the work still had to be done.

Now this is where the story really gets good. In the face of all the adversity that Covid-19 suddenly dropped on us, these calves gave us a ray of hope. I think that we often get wrapped up in the busyness of our lives that we fail to discover hidden interests or passions that we may have. For families, sitting down to eat together and do activities together as a family now seems more important than it did several months ago. Just like Leeroy helped Cayden and his mom find a shared passion, Cash and Frederick began to do the same in their families.

Even though we were unable to meet as we normally would, these kids continued to work and even purchased additional calves on their own. Cayden purchased a heifer named Patricia and Clarke got a heifer named June. After a few weeks and school hadn’t started back in person and athletics were still on hold, Cayden’s sister Emily and Clarke’s brother Davis began to take an interest in what was going on. A couple more calves were then purchased. The kids all being related and living in the same town, they began to meet on their own regularly and work their calves. As spring turned to summer and we still had no “normal” activities started back up, even Anderson’s sister Andrea began to show interest in working a calf. In the course of one year, we went from one steer and one boy to five steers, four heifers and six kids! That happened without any guarantee that there would even be any fairs or livestock shows to participate in.

We eventually got the news that we would be able to participate in youth livestock shows. Over the past two months our youth have had the opportunity to show their cattle in three events, the NC Jr. Beef Roundup, WNC Youth Livestock Show and Macon County Youth Livestock Show.

Showing your cattle or other livestock is icing on the cake and something that all participants look forward to. It doesn’t matter if you win the show or come in dead last, the fact that you start a project and finish it through means more to me as an agent than how you will ever place in the show ring. This year more than any other year, I have been reminded that agriculture, especially raising livestock can be therapeutic, it can give you a sense of belonging, it can bring families closer together and teach us many valuable life lessons. For these kids, passions have been discovered that will help guide them throughout the rest of their lives, animals that have been purchased will be the foundation for their farming operations in the future. Some of these youth will not have to wait to have a farm as they are already farm operators now.

Even when the world is turned upside down, there are some things that we can count on to keep life in perspective. In 2020, I’m glad that the livestock still needed to be fed and I’m thankful that the interest of one boy in 2018, led to five other youth getting involved in raising livestock in 2020. I look forward to watching them grow into young adults who may not all go into production agriculture as a career but will have the respect, love and passion to support the next generation who will follow in their footsteps.