Tomato Questions for the Gardener

Find this article at:
go.ncsu.edu/readext?611608
— Written By Deborah Hunter and last updated by Christy Bredenkamp

Tomatoes are the most popular plant grown in home vegetable gardens. We eat them fresh, in soups and salads, as juice and salsa and in many other ways. It’s not surprising people ask so many questions about tomatoes. The following are a few.

What are some low acid tomatoes? Although acidity in tomatoes is influenced by variety, it is also greatly influenced by time of harvest and growing conditions. Taste is not an indication of acidity, since taste is more highly influenced by sugars and other materials than by the acids present. Generally, there is not a great variation in the acidity of popular tomato varieties grown under the same conditions and harvested at the same stage of ripening. Yellow and white varieties are not less acid than many red varieties.

Is there an advantage to growing hybrid tomatoes? Many people now prefer heirloom type tomatoes, but most hybrids have some disease resistance bred into them, as well as more vigor and improved fruit quality.

Why do tomatoes produce a lot of leaves and few or no fruit? This condition usually occurs when too much nitrogen, either in manure or in commercial fertilizer, has been applied to the plants early in the season before fruit production begins. Fertilize lightly at planting and sidedress as nitrogen is needed after fruit set has begun.

Is it really necessary to stake tomatoes? No. However, staking can save space in the small garden, lessen disease pressure, prevent ground rots on fruit and make tomatoes easier to pick and spray.

When is the best time to start pruning tomatoes? Pruning is generally begun when flowering begins.

Can I get a bigger crop from “Tree Tomatoes”? The plant sometimes sold as a tree tomato is not a tomato, but a tropical plant of the same family. Plants must be at least two years old to fruit, and sometimes fruit under greenhouse conditions, but seldom under normal home conditions. A tomato variety “Giant Tree” has a large, stout plant and large fruit, but does not out-yield popular hybrid varieties.

What causes tomatoes to crack? There is a varietal difference in the tendency to crack and type of cracking. However, cracking in susceptible varieties is more severe after periods of heavy rain and humidity.

What causes the end of the tomato to have a blackened spot? This problem, blossom-end rot, results from a lack of calcium in the developing fruit. There may or may not be a lack of calcium in the soil. The development of blossom end rot is influenced by several factors. One of these is moisture fluctuation, especially low soil moisture following abundant soil moisture. Keep plants well watered and mulched to reduce this problem. Maintain optimum calcium levels in the soil, and avoid deep cultivation that may damage roots.

What causes my tomatoes to be deformed? Cold weather at time of fruit set may cause deformation. Some varieties of the “Beefsteak” type are more likely to have the problem.

What are the little white bumps that develop on the stems of my tomato plants? The little bumps are root primordia. If the tomato falls down or the stem is covered, these can develop into roots. It is a natural characteristic of the plant. These become most evident in wet weather if the normal plant roots have been damaged or partially killed or if the plant has been exposed to certain types of herbicides.

What diseases can affect tomatoes? Listed below are four groups of diseases that most frequently occur on tomatoes. Symptoms are described briefly.

Wilts
Plants wilt and may die. There are several different causes. Special soil fungi (Verticillium and Fusarium) are a common cause of wilt. Walnut trees also are associated with tomato wilting; a toxin from walnut roots causes this problem. These wilts also cause internal woody stem tissue to turn brown.

Control: Avoid garden areas where tomatoes, eggplants, peppers, potatoes, strawberries, and brambles were grown in the past few years. Avoid wet areas. Do not plant near walnut trees. Grow tomato varieties resistant to fungal wilts. As soon as harvest is completed, remove and destroy or discard plants.

Control: Choose a sunny garden planting site. Avoid garden areas where tomatoes were grown during the past few years. Insure adequate fertility by following soil test recommendations. Space plants to promote drying-off of leaves and fruit; stake plants to keep fruit off the ground. Use appropriate labeled fungicides when necessary. Remove plants and the largest roots as soon as possible after harvest is completed.

Fruit Rots of Tomatoes (Anthracnose, Early Blight, and Late Blight) – Many rots develop on fruit that are touching the ground. Discrete spots also can develop on other fruit. Fruit rots are promoted by contact with the soil and by wet weather. 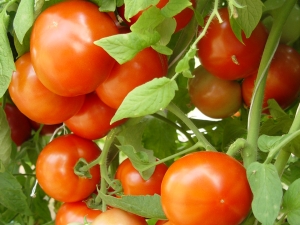